Thatʻs according to Gautam Mukundaʻs intriguing Harvard Business Review blog. He adds the codicil “most of the time” to his title. He argues that external constraints, internal constraints, and leader selection systems create a pool of leaders who are similar, and therefore, largely replaceable, in todayʻs corporate culture. Interesting…

He riffs on popular leadership theories (without much citation) and even weighs in on the arts and leadership/leaderless orchestra model:

“From Zubin Mehta to Leonard Bernstein, great conductors seem an integral component of great classical music. Someone needs to make sure the woodwinds don’t come in too early and the percussionists don’t drown everyone else out.The Orpheus Chamber Orchestra, though, has received multiple Grammies and is regarded as one of the finest orchestras in the world — without a conductor. It turns out that professional musicians can organize themselves without a formal leader just fine.”

Thereʻs something to this. Even the most innovative leader must give way to the next leader answering the call of his or her time. Non profits die because leaders imagine they are not replaceable, and so they have no plan to pass their “baby” on to the next needed leader. And corporations shed leaders like snakes shed their skins, passing the same folks from company to company until they retire — or become famous for leadership.

Repleaceable leadership. Itʻs almost iconoclastic in the USA to claim that any of us are replaceable, when we are meant to be unique, powerful creators of ourselves and our society. We are not machine parts, nor do we match — but we are replaceable. That is, leaders hold a place for a time, and wear out. Gratefully, we send them off. Gratefully, we replace them.

What does this mean about authenticity, greatness, individuality? All these qualities gather around a leader, sometimes simply because of his or her position, sometimes because s/he embodies them naturally, sometimes a combination of both. And yet, they are not eternal, nor are leadership skills unique to the leader, or even the Leader, as some philosophers like to distinguish small ordinary daily leadership from Extraordinary Heroic Leadership. No, even Heroes are replaceable, no matter what Odysseus may have wished. (Why else did he have to kill all those suitors when he got home?)

But I digress…. Fundamentally, I like the provocation of Mukundaʻs essay. It is a challenge to comforting dogma about leadership excellence in a certain context, where a leader leads followers, and followers follow a leader, in a kind of organizational serial monogamy, with a nasty break-up to be expected sooner than later.This theory is credible because leadership is about the moment, and organizational culture raises up a certain kind of leader to serve a certain kind of purpose. Arguably, the more mainstream the purpose, the more replaceable the leader. But even revolutionaries step aside for new and bloody revolutions.

But wait — here, letʻs remember that, when we talk about leadership, we rarely identify the context — power relationships, social space, organizational and cultural history. We generalize, universalize, hungry to name qualities that can bring us all to embody or identify greatness in a leader. (We canʻt help it. Our brains work that way.) Sometimes we need a good poke in the idealism.

So letʻs step back a moment, and consider that this idea only rings true when we look at leadership as top-down, as if the leader is the head, and the follower the body. But what if no one person is the head, the feet, the liver — to batter the metaphor a bit. Is turnover the same in “leaderless” organization, with people playing their many leaderly parts in a more collective decision-making system?

I donʻt think so — because the replaceable leader, as presented in Mukundaʻs argument, reminds me of the succession to a throne – i.e. “The King is Dead. God Save the (New) King!”  If there is no King, an organization depends on its many parts to dance together, for the most part shifting position and playing many roles rather than being replaced.

If an orchestra can be collectively organized, or in that seductive phrase, “leaderless” then there is no one to replace  as the head — only a group wisdom and goal to create music. A consensus. Similarly, a movement can be ” leaderless” (feminism, the Occupy movement, historic unions, etc.), with many parts and no head to replace. The many stand up together. There is no singular spokesperson, no one voice that galvanizes all voices.

So maybe this theory of the replaceable leader is really more about the 1%. The 99%, leadership among the many, have a different idea of how leadership works. There is no one dominant position to fill and empty in a grassroots movement. That kind of movement is more like a murmuration of starlings, a focused flock. 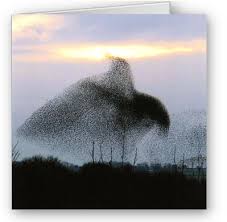 one bird from many — a murmuration

And the effect, when a movement is successful, is general cultural evolution. The bottom line changes. Migration, in human terms, from one paradigm to another.

At least, thatʻs another theory worth pursuing, with a thorough study of “leaderless” structure and flow. Maybe thereʻs a whole different kind of replaceability going on there, with so many ordinary people leading together. Or maybe, every person becomes (potentially) unreplaceable.

Itʻs a mystery (most of the time).

← Bread and Circuses: Stabilizing Leadership or Seductive Distraction
“Comedy is the Soft Spot of All Dictators” →