When Visionaries Disappoint Us: Living Legacy vs. Leadership Choices

September 6, 2017 · by carolburbank · in Leaders in the News, Leadership And Climate Change, Leadership Myths, Visionary Leadership, Women and Leadership · 4 Comments

Aung San Suu Kyi, winner of the Nobel Peace Prize for democratic resistance to military dictatorship in Myanmar, was released from house arrest in 2010. Now State Counsellor, facing a crisis of targeted attacks on the minority Rohingya people, she is expected to stand up for inclusion and peace once again.  What can we learn about leadership from the polarized response to her statements blaming the retaliation on insurgents and “fake news?”

Her statement about the treatment of the Rohingya has been widely quoted and criticized. A transcript of her comment from CNN: “During a call with Turkish President Tayyip Erdogan , Suu Kyi said her government was already working to protect the rights of the Rohingya. “We know very well, more than most, what it means to be deprived of human rights and democratic protection,” Suu Kyi said, according to a readout of the call. “So we make sure that all the people in our country are entitled to protection of their rights as well as, the right to, and not just political but social and humanitarian defense.” Yet, she also appears to blame the Rohingya, framing the military’s action as retaliation against terrorism.

It seems this is an oversimplification, at best. Reports of the retaliation to the Rohingya from the UN and other sources indicate that her statements minimize the horror.  “Tun Khin, from the Burmese Rohingya Organisation UK, says Rohingyas are suffering “mass atrocities” perpetrated by security forces in the northern part of Rakhine state. A counter-insurgency campaign was launched after nine border policemen near Maungdaw were killed in a militant attack in early October, but the Rohingya say they are being targeted indiscriminately,” with rape, military attack, destruction of homes, and other violence directed to all Rohingya, not just insurgents. (From the BBC source).

Aung San Suu Kyi is calling this “exaggeration” that obscures the causes of the conflict. Even if her comments reflect internal facts rather than an official smokescreen, her leadership is now being questioned as complicit with the military government’s oppression.

What’s going on? Is Aung San Suu Kyi failing to live up to her legacy? Or has she given way to pragmatism or denial now that she has gained some power?

The most eloquent critic has been George Monbiot, in the Guardian.  He writes: “By any standards, the treatment of the Rohingya people, a Muslim minority in Myanmar, is repugnant. By the standards Aung San Suu Kyi came to symbolise, it is grotesque. They have been described by the UN as “the world’s most persecuted minority”, a status that has not changed since she took office. The Convention on the Prevention and Punishment of Genocide describes five acts, any one of which, when “committed with intent to destroy, in whole or in part, a national, ethnical, racial or religious group”, amounts to genocide. With the obvious and often explicit purpose of destroying this group, four of them have been practised more or less continuously by Myanmar’s armed forces since Aung San Suu Kyi became de facto political leader.”

Stark protests against the leader have raised her hypocrisy in the face of this crisis, and criticized her blame for terrorists and “fake news.” 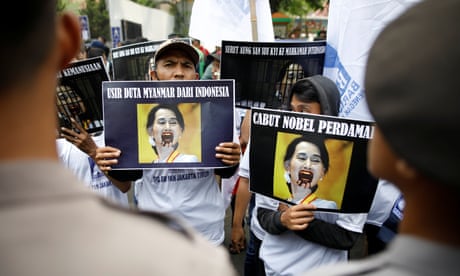 Monviot’s expectations are ambitious, but not entirely realistic: “I recognise that the armed forces retain great power in Myanmar, and that Aung San Suu Kyi does not exercise effective control over them. I recognise that the scope of her actions is limited. But, as well as a number of practical and legal measures that she could use directly to restrain these atrocities, she possesses one power in abundance: the power to speak out. Rather than deploying it, her response amounts to a mixture of silence, the denial of well-documented evidence, and the obstruction of humanitarian aid.”

What can we learn from this beloved leader’s fall from her pedestal?

All over the world, ethnic and religious clashes are breaking down civility, and leaders are responding with a range of solutions and comments. Some are inflammatory, as this seems to be. Others are conciliatory. But it feels like all are inadequate in the face of the anger, violence, and hatred. The world’s reaction to Aung San Suu Kyi reflects our frustration with ethnic hatred in our own countries, inflamed by globalization and socioreligious conflict, as well as changes in climate, economic structures. We long for clarity. We are struggling.

There are two lessons for leaders in this painful story.

First, values really do matter, and our commitment to them has to go beyond lip service. Granted, words are a kind of action, as our former praise of this leader’s outspoken resistance shows. But consistent values, spoken and in action, are a force of inspiration and vision. In this case, a beloved leader is arousing double anger, because she was raised so high on a pedestal that her actions/statements seem like a betrayal of her values as well as the people suffering in the crisis. Whether it is right or wrong, that feeling of double betrayal makes her lose credibility and effectiveness.

Second, “celebrity” leadership creates imaginary leaders in our minds. This process can be used to persuade people we are bigger and better than we are, or our followers might use it to persuade themselves that we are perfect or ideal. If you, like Aung San Suu Kyi, have become an icon rather than a person, your complexities will not be welcome in a crisis. I cannot say what is really happening in Myanmar, and I tend to believe the refugees and the UN. Whatever is happening, though, it is a horrific example of how a leader who rose to power because of her ability to stand up to oppression became a saint, and now she is seen with feet of (bloody) clay. In such situations, we lose faith with righteous disappointment, and may be blind to complexities that could become solutions.

Please know, with these leadership observations, I am neither raising Aung San Suu Kyi back onto her Nobel pedestal or knocking her into the dirt. The violence in Myanmar is an example of conflict that is both deeply local and worldwide, and needs a profound and healing attention. Only history will be able to tell what is truly happening; only great leadership, pragmatic and visionary, will bring positive change.

The questions I want to ask are these: What are we missing, when we righteously react instead of ask hard, and harder questions, about changes in our leadership stories, and our world? Do we expect an impossible authenticity from our heroic leaders? How can we see beyond the lure of imaginary perfection in our leaders without losing hope?